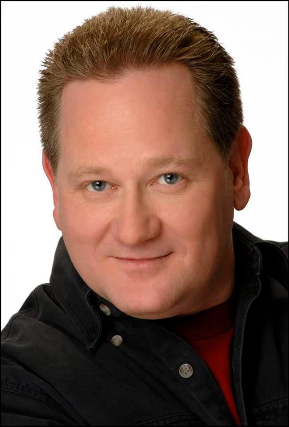 Richie Byrne brings a unique mix of talents to the stage. Combining a quick wit and New York sarcasm with the charm of an old-school storyteller, Richie provides a dominating stage presence with one of the highest laugh-per-minute counts in the business. Richie's rants on his family…his job…his weight…his life… as well as his take on pop culture make him incredibly relatable to any audience.

Richie’s comedy credits include such well-known clubs as Dangerfield's, Carolines on Broadway, and Gotham Comedy Club in New York City. He has also headlined many clubs around the country, including Hilarities in Cleveland, The Ice House in Pasadena, The Borgata in Atlantic City, as well as the Tropicana in Atlantic City and Las Vegas.

Richie is proud to be the warm-up act for the hit series "The Dr. Oz Show" since its debut in 2009. He has also been a guest on the show many times. Besides “The Dr. Oz Show,” Richie’s other daytime warm-up credits include “The Rachael Ray Show,” “The Chew,” “The Jane Pauley Show,” as well as the sitcom “Murphy Brown.”

Not only a popular comedian, but Richie is also an accomplished actor & singer, with a long resume of theatrical credits (music & legit) and television & film. You can see him on legendary shows such as HBO's "Sex and the City" and "The Sopranos" as well as NBC’s "Law & Order: Criminal Intent" & "Conviction." you can also see him in the feature film "Goodbye Baby." Written & directed by Dan Schecter, the film is about a young girl who enters the world of Stand-Up. Besides performing material in the movie & playing a part, Richie was also a consultant on the set & helped to write original material for the lead character.

Richie is proud to have performed for military bases throughout the U.S. and Europe for the “Comics on Duty” organization as well as countless charities, including "Comedy Cures." Created by Saranne Rothberg, “Comedy Cures” is a non-profit organization using comedy as a therapeutic tool for terminally ill patients and their caregivers.

Richie was the first comic to ever perform at The United Nations, where his opening line was, “Is anyone here from out of town?” He has also been seen at such historic venues as Carnegie Hall and Radio City Music Hall.

He is honored to be the co-host of the popular podcast “Drinks, Jokes & Storytelling” with fellow comedian Mark Riccadonna and producer Joel Richardson and recently was added as a co-host to the show “Hangin’ with Langan” starring comedian Maureen Langan. “Hangin’ with Langan can be heard every Sunday night from 7-10 pm western time on KGO-AM radio in San Francisco. Mark Riccadonna grew up an artsy jock outside of Youngstown, Ohio. At age 17 (like a bad independent movie), Mark moved to NYC in search of himself and happiness. He pursued Theatre at The American Academy of Dramatic Arts, joining "The Company" after graduation. Soon after, Mark stumbled upon Stand-Up Comedy and found success as a storyteller, performing throughout New York City, and 'on the road'. Mark currently also performs for Armed Forces Entertainment, and has entertained U.S. and U.N. Troops worldwide, performing in six continents while working with his childhood heroes. Outside of comedy, Mark is an accomplished actor and writer. Most recently Mark has a lead role in the feature film "Days of Power" and is writing for Saturday Night Live's Weekend Update.
Whether he is working with The Amoralists Theatre Company (In the acclaimed hit "Happy in the Poor House"), Angry Shih Tzu Productions or on tour with Stand-Up, Mark continues to climb the ranks. He is a gifted storyteller, with a charisma that makes you feel like you’ve known him forever, unique delivery, signature voice (that has landed him several commercials) and likability; you will see why he is a favorite at clubs and theatres everywhere.
Not only is storytelling an art that throughout time has passed information, life lessons and entertainment from generation to generation, it is one of the oldest art forms celebrated. It is also the best part of the entertainment business. Just ask Mark Riccadonna about when the the show is over. After the place has cleared out, there is no better feeling then bellying up to the bar with your fellow performers, cracking a drink and a smile, while entertaining your fellow entertainers. What he does on stage isn't what entertains Mark. He loves the stories from the green room, a sparkle in the eye, a drink in hand and a great tale from the road. In "Drinks, Jokes and Storytelling" it Mark's goal to bring the green room out to the stage and let the audience see behind the scenes of what entertains their entertainment.
READ MORE +

We're kicking off a hilarious weekend with Mike Ca

The Carnival of Chaos has arrived! @iammikecannon

We're gearing up for a hysterical Summer! Check ou

Laugh it up at the premiere comedy club of the Hud

Don't let the rain ruin the fun this weekend! Two

On Friday June 4 at 7pm with the hilarious Nathan

The Weekend is here, and so is Patty Rosborough Ma

Mike Cannon is a New York City based comedian and

Laugh it up this weekend with the great Patty Rosb